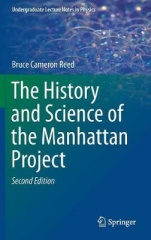 The History and Science of the Manhattan Project

By (author) Bruce Cameron Reed
Genres: History of science, Atomic & molecular physics, Nuclear chemistry, photochemistry & radiation
Format: Hardback
Publisher: Springer-Verlag Berlin and Heidelberg GmbH & Co. KG, Berlin, Germany
Imprint: Springer-Verlag Berlin and Heidelberg GmbH & Co. K
Published: 1st Mar 2019
Dimensions: w 156mm h 234mm d 30mm
Weight: 954g
ISBN-10: 3662581744
ISBN-13: 9783662581742
Barcode No: 9783662581742
Synopsis
The development of atomic bombs under the auspices of the U.S. Army's Manhattan Project during World War II is considered to be the outstanding news story of the twentieth century. In this book, a physicist and expert on the history of the Project presents a comprehensive overview of this momentous achievement. The first three chapters cover the history of nuclear physics from the discovery of radioactivity to the discovery of fission, and would be ideal for instructors of a sophomore-level "Modern Physics" course. Student-level exercises at the ends of the chapters are accompanied by answers. Chapter 7 covers the physics of first-generation fission weapons at a similar level, again accompanied by exercises and answers. For the interested layman and for non-science students and instructors, the book includes extensive qualitative material on the history, organization, implementation, and results of the Manhattan Project and the Hiroshima and Nagasaki bombing missions. The reader also learns about the legacy of the Project as reflected in the current world stockpiles of nuclear weapons. This second edition contains important revisions and additions, including a new chapter on the German atomic bomb program and new sections on British and Canadian contributions to the Manhattan project and on feed materials. Several other sections have been expanded; reader feedback has been helpful in introducing minor corrections and improved explanations; and, last but not least, the second edition includes a detailed index.