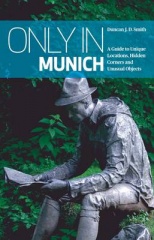 A Guide to Unique Locations, Hidden Corners and Unusual Objects

By (author) Duncan J. D. Smith
Genres: Travel writing
Format: Paperback / softback
Publisher: The Urban Explorer, Vienna, Austria
Published: 1st Feb 2014
Dimensions: w 135mm h 210mm d 25mm
Weight: 480g
ISBN-10: 3950366202
ISBN-13: 9783950366204
Barcode No: 9783950366204
Synopsis
Discover Europe with the 'Only In' Guides! These ground breaking city guides are for independent cultural travellers wishing to escape the crowds and understand cities from different and unusual perspectives. Unique locations, hidden corners and unusual objects. A comprehensive illustrated guide to more than 80 fascinating and unusual historical sites in one of Europe's great cities including; Atmospheric crypts, fascinating breweries, wartime air raid shelters, eccentric museums and little-known cemeteries. Following the history from medieval Munich and the Wittelsbachs to the Raterepublik and the Third Reich. Shows sites such as - A Jugendstil swimming pool, Little Asia, the sunken village, and Hitler's secret headquarters The 'Urban Explorer' Duncan J. D. Smith is a travel writer and photographer. In his ground breaking 'Only In' Guides he reveals European cities from unique and hidden perspectives. He has travelled across several continents and described his experiences in books, magazines, and online. Born in Sheffield, England in 1960, he studied history and archaeology at university. He is a Fellow of the Royal Geographical Society.