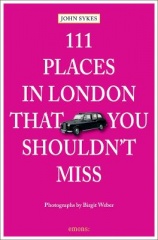 111 Places in London That You Shouldnt Miss

By (author) John Sykes
Genres: Travel & holiday guides
Format: Paperback / softback
Publisher: Emons Verlag GmbH, Cologne, Germany
Published: 1st Jan 2003
Dimensions: w 132mm h 210mm d 25mm
Weight: 470g
ISBN-10: 3954513463
ISBN-13: 9783954513468
Barcode No: 9783954513468
Synopsis
Almost everybody knows Big Ben, the British Museum, Buckingham Palace, and the Tower Bridge. But the secret London which shapes the flair of the capital of the British Empire more than anything else is getting harder and harder to find. This guide elucidates unknown aspects of well-known places, but also explores the London unknown to foreigners and, in part, to natives, and its unique stories. Such as bars with noble origins going back for centuries; listed concrete fortresses; 300 year-old wine shops and synagogues; mosques and Buddhist temples; a tree planted in 1802, the lowest mighty branches of which are no higher than your head; a medieval cemetery for pariahs; a street lantern which has been lit for more than 100 years; the monument to 10,000 Jewish children saved from the Nazis, and one for the Great Fire of 1666; the police den on Trafalgar Square; legal and illegal street art; a crypt in which skulls and bones are arranged in a checkerboard pattern; or the secluded place where Paul McCartney concealed his firm. Unknown London from the Middle Ages until today - brand new.