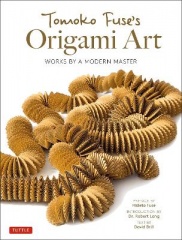 Works by a Modern Master

By (author) David Brill, Tomoko Fuse
Introduction by Robert Lang
Preface by Hideto Fuse
Contributions by David Brill
Genres: Photography & photographs, Origami & paper engineering
Format: Hardback
Publisher: Tuttle Publishing, Boston, United States
Published: 19th May 2020
Dimensions: w 229mm h 305mm d 17mm
Weight: 1474g
ISBN-10: 4805315555
ISBN-13: 9784805315552
Barcode No: 9784805315552
Synopsis
Tomoko Fuse has been one of the world's premier origami artists for more than 35 years. This beautifully photographed book examines the three-dimensional geometric designs she is famous for. Fuse, often referred to as "the queen of origami," discovered the art of folding paper at just seven years old. She has come a long way since then, having had her work highlighted in exhibitions around the world, including Paris Origami (Carrousel du Louvre, 1998), On Paper (Crafts Council London, 2002) and her solo show Yorokobi (Bauhaus Dessau, 2004). In addition to teaching, folding and writing, she also collaborated with designer Denis Guidone for Milan Design Week 2018 and was a featured artist in Nova's episode "The Origami Revolution" (February, 2017). An artistic anthology of her most impressive work, Tomoko Fuse's Origami Art can serve multiple purposes: as inspiration for an experienced origami folder; as a truly impressive coffee table book for the artistically-minded; or as a push for intermediate folders to try their hand at modular origami models.

Submit your review
Newspapers & Magazines
"...readers will be astonished and intrigued by the pieces gathered in this anthology of [Fuse's] designs...Elegant color photographs tell her story, with additional narratives...A science for artists; an art for scientists..." - Booklist "It is a fascinating and intoxicating experience to get lost in Tomoko Fuse's labyrinth of folds, which manages to make us forget technique and see nothing but art." - Nicolas Terry, French origami artist, author and publisher of a series of books on origami "The 'queen of origami' opens her treasure chest and shows us her incredible paper jewels, one by one. But this is not simply paper; it is art!...The origami in this book is of a higher level, a purely artistic origami." - Francesco Decio and Vanda Battaglia, Italian origami artists and authors of Lezioni di origami [Origami Lessons] "More than any other origami creator, the work of Tomoko Fuse has successfully made the elusive transition from pure technique to pure art. This is a must-have book." - Paul Jackson, British origami artist and author of The Art and Craft of Paper Sculpture "Few origami artists have been as accomplished in as wide a range of styles, constantly pushing the boundaries on uncharted approaches. Fuse's style is so rich, her geometric forms have an organic feel. This book also showcases her incredible execution of her works, clearly demonstrating her worthiness of the title of Origami Master." - Marc Kirschenbaum, American origami artist and author of Origami in an Instant "...Tomoko Fuse's Origami Art is an extraordinary showcase of the three-dimensional geometric designs that have made Fuse world-famous...a treasure for artbook collections and origami enthusiasts, highly recommended." - Midwest Book Review
Cookies are disabled, please note some site features may not function correctly.