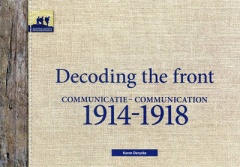 By (author) Karen Derycke
Genres: Memorials, monuments, First World War, Memorials & rolls of honour, Coping with death & bereavement, Communication studies
Format: Paperback / softback
Publisher: Memorial Museum Passchendaele 1917, Zonnebeke, Belgium
Published: 13th Jun 2016
Dimensions: w 148mm h 210mm d 8mm
Weight: 265g
ISBN-10: 9082252112
ISBN-13: 9789082252118
Barcode No: 9789082252118
Synopsis
The entry of the Dominions and the colonies into WWI produced a mixture of languages and cultures and communication thus became an international concept. The publication 'Decoding the Front' draws the attention to the wide range of possibilities that the word 'Communication' covers.Around the turn of the century, modern means of communication were not well-developed but the First World War and technological progress soon changed this. Photography and film, letters,postcards and many ways of communication at the front are discussed such as radio, telephone and telegraph. But also animals such as homing pigeons,horses and dogs were still indispensable in the vast communication network; communication in the First World War was often a strange contradiction between primitive and modern technologies.