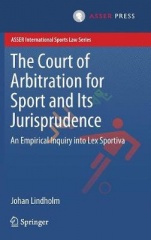 The Court of Arbitration for Sport and Its Jurisprudence

By (author) Johan Lindholm
Genres: International institutions, Arbitration, mediation & alternative dispute resolution, Sport & the law
Format: Hardback
Publisher: T.M.C. Asser Press, The Hague, Netherlands
Published: 2nd Apr 2019
Dimensions: w 156mm h 234mm d 21mm
Weight: 686g
ISBN-10: 9462652848
ISBN-13: 9789462652842
Barcode No: 9789462652842
Synopsis
This book takes a close look at the Court of Arbitration for Sport (CAS), challenging existing claims and answering previously unanswered questions, by considering all of its publicly available decisions, both in its entirety as a body of jurisprudence and on a case-by-case level. It also investigates the actors involved in adjudication before the CAS, both the parties that bring disputes before the CAS and the arbitrators that resolve them, and in so doing establish precedents that govern sports generally. While the book relies upon and includes more traditional legal theory and analysis, it combines this with an empirical analysis of a large portion of the CAS's decisions. Hereby it relies upon and relates to the theory of the development of a transnational legal order in sports, the lex sportiva. The publication is targeted at and will benefit those professionally working in or interested in the fields of sports law, arbitration law, transnational law, or empirical legal studies. Johan Lindholm is a Professor of Law at Umea University in Sweden.

Submit your review
Newspapers & Magazines
"In this intellectual, erudite work, Lindholm, relying on a network analysis, proves that in large part CAS retains the characteristics of the oldest network in sport - the old boys' club, and an old Swiss boys' club at that." (Jack Anderson, idrottsforum.org, September 25, 2019)
Cookies are disabled, please note some site features may not function correctly.