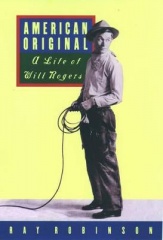 A Life of Will Rogers

By (author) Ray Robinson
Genres: Variety shows, music hall, cabaret, Biography: general, History of the Americas, 20th century history: c 1900 to c 2000
Format: Hardback
Publisher: Oxford University Press Inc, New York, United States
Published: 2nd Dec 1996
Dimensions: w 164mm h 244mm d 27mm
Weight: 634g
ISBN-10: 0195086937
ISBN-13: 9780195086935
Barcode No: 9780195086935
Synopsis
Hailed by The New York Times as "America's Aristophanes," Will Rogers was one of this century's most astute and beloved humorists. If as he often remarked, he never met a man he didn't like, it is also true that Rogers never met a man he didn't like to make fun of. Everyone from congressmen and Presidents to Hollywood movie moguls and wealthy industrialists bore the brunt of his gently lacerating wit-and seemed, mostly, to be charmed in the process. So popular did Rogers become-through dozens of films, a daily column that ran for nine years in newspapers across the country, and countless lectures and stage performances-that he was often urged to run for Congress and even the Presidency. Upon receiving a mock appointment as Congressman-at-Large for the whole United States, Rogers protested, "I regret the disgrace that's been thrust upon me here tonight. I've tried to live my whole life so that I would never become a congressman." In American Original, Ray Robinson chronicles the trajectory of Will Rogers' remarkable life. Written with engaging immediacy and filled with a wealth of delightful anecdotes, this lively portrait follows Rogers from his childhood in the Indian Territory of what is now Oklahoma, to his first spellbinding lariat performances in the Wild West shows (where he would often lasso prominent audience members and drag them on stage), to his stardom in vaudeville and the Ziegfeld Follies, to his early silent movies and the later "talkies," and finally to his astonishing influence as a "cowboy philosopher" columnist read by over 40 million Americans. Far more than other biographers, Robinson excels at conveying Rogers' impact as a political commentator ("I belong to no organized political party. I am a Democrat.") and his great success as an actor in Hollywood, where he was the leading star of Fox Films. And along the way, Robinson paints a vibrant portrait of one of America's most colorful eras. We follow the early evolution of modern entertainment, enjoy vivid snapshots of W.C. Fields, Charlie Chaplin, Florenz Ziegfeld, Eddie Cantor, Samuel Goldwyn, Shirley Temple, and John Ford, and, perhaps most important, witness the major political events of the era through Will Rogers' uniquely perceptive eyes. American Original succeeds most appealingly in bringing Will Rogers before us with all the spontaneity, intimacy, and honesty of a live performance. In it we are given front row seats to the life of a character unabashedly American and unforgettably original.

Submit your review
Newspapers & Magazines
"I never met a Ray Robinson biography I didn't like, but this one beats all, a delight that gets behind the one-liners to turn an icon into a fascinating man of his times."-Robert Lipsyte, New York Times Columnist "A folksy portrait of the gifted cowboy humorist."-Vanity Fair
Cookies are disabled, please note some site features may not function correctly.