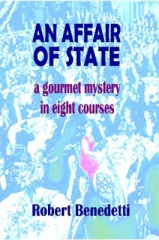 AN AFFAIR OF STATE: A Gourmet Mystery in Eight Courses

By (author) Robert Benedetti
Genres: Crime & mystery
Format: Paperback / softback
Publisher: Robert Benedetti Productions, Inc., Santa Monica, United States
Published: 25th Oct 2007
Dimensions: w 152mm h 229mm d 9mm
Weight: 234g
ISBN-10: 061516529X
ISBN-13: 9780615165295
Barcode No: 9780615165295
Synopsis
AN AFFAIR OF STATE first appeared in play form and ran over a year in Chicago. The story follows a banquet served in the British Governor's mansion on the Island of Cyprus on the night before the outbreak of WWI, where a secret treaty that may avert war will be delivered to an unknown Austrian courier. When a leading German correspondent is found murdered, a number of other intrigues come to light. Each chapter of the book is devoted to a single course of the dinner as these plots interweave and move toward a violent and surprising climax. Recipes for each dish from the classic Escoffier cookbook are included. Benedetti's first novel, The Long Italian Goodbye, received high praise from authors and critics such as Adriana Trigiani, Ernest Gaines, and Ron McLarty, and Richard Christiansen of the Chicago Tribune.