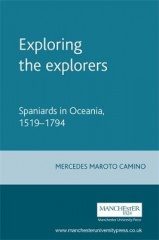 By (author) Mercedes Camino
Genres: Early modern history: c 1450/1500 to c 1700, Geographical discovery & exploration
Format: Hardback
Publisher: Manchester University Press, Manchester, United Kingdom
Published: 1st Feb 2009
Dimensions: w 156mm h 234mm d 16mm
Weight: 538g
ISBN-10: 0719077796
ISBN-13: 9780719077791
Barcode No: 9780719077791
Synopsis
Exploring the Explorers: Spaniards in Oceania 1519-1794 is the first study of cross-cultural engagements between the indigenous peoples of the Pacific and Spanish explorers during the early modern period. Bridging disciplines, the book sets out to analyse in detail eight main voyages and their aims and outcomes, looking at the different patterns of contact and the use of gift-giving and bartering as social cement. This fascinating and original study will broaden the investigation of world exploration and Pacific ethnography, as many of the sources from these voyages are scarcely known and have not been translated before. It will also expand an understanding of Spanish and world exploration, developing the history of the Spanish Pacific beyond the long-standing colony of the Philippines. The study will be of particular interest to scholars and students of Early Modern European history as well as anthropologists, ethnographers and those interested in stories of exploration and discovery throughout history. -- .