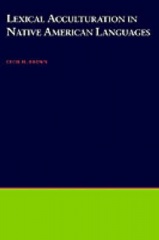 Submit your review
Newspapers & Magazines
This is a complex effort, and one can only marvel at the amount of work required to gather the data, analyze them, sort them into meaningful categories, and then draw some general conclusions. Obviously, the comparative exercise - over and above the studies of linguistic acculturation in the individual languages - was a fruitful and fulfilling one. Certainly Brown...has accomplished a major task, and one that is an excellent demonstration of method as well as
results. This volume should be of considerable use in courses on Native American languages, acculturation, comparative methods, and historical approaches. * Language in Society *
Cookies are disabled, please note some site features may not function correctly.