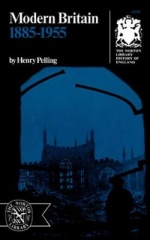 By (author) Henry Pelling
Genres: Literature & Literary Studies, History
Format: Paperback / softback
Publisher: WW Norton & Co, United States
Published: 17th Oct 1966
Dimensions: w 127mm h 203mm d 14mm
Weight: 270g
ISBN-10: 039300368X
ISBN-13: 9780393003680
Barcode No: 9780393003680
Synopsis
Two main themes engage Professor Pelling, as he examines the events of these seventy years: Britain's external difficulties and her gradual recognition of the need to alter her political and economic relations--not only with her "Empire" but with all other nations as well--and the social and political conflicts at home. At the turn of the century, Britain was a strongly imperialist nation. Increasing rivalry with foreign countries for markets and pressure for reform and an increased standard living at home brought about the changes in foreign policy and internal affairs of the first decade of the twentieth century. The Boer War, the Irish struggle for home rule and independence, World War I, and World War II accelerated the long term domestic developments. The elimination of various nineteenth century forms of inferiority--the abysmal poverty of the workers, unemployment, suppression of women, and servility of the Welsh and Irish to the English--was accomplished relatively peacefully. "Taken together, all these changes transformed the character of British society and Britain's place in the world. Generally speaking, where relations were simple and hierarchical in the nineteenth century, they have now become complex, with a resulting dispersal of authority."