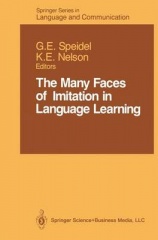 The Many Faces of Imitation in Language Learning

Springer Series in Language and Communication 24

Edited by Gisela E. Speidel, Keith E. Nelson
Genres: Language acquisition
Format: Hardback
Publisher: Springer-Verlag New York Inc., New York, NY, United States
Published: 16th May 1989
Dimensions: w 156mm h 234mm d 21mm
Weight: 686g
ISBN-10: 0387968857
ISBN-13: 9780387968858
Barcode No: 9780387968858
Synopsis
In this book we take a fresh look at imitation. With the knowledge of some 20 years of research after Chomsky's initial critique of the behavioristic approach to language learning, it is time to explore imitation once again. How imitation is viewed in this book has changed greatly since the 1950s and can only be under stood by reading the various contributions. This reading reveals many faces, many forms, many causes, and many functions of imitation-cognitive, social, information processing, learning, and biological. Some views are far removed from the notion that an imitation must occur immediately or that it must be a per fect copy of an adult sentence. But the essence of the concept of imitation is retained: Some of the child's language behavior originates as an imitation of a prior model. The range of phenomena covered is broad and stimulating. Imitation's role is discussed from infancy on through all stages of language learning. Individual differences among children are examined in how much they use imitation, and in what forms and to what purposes they use it. The forms and functions of parent imitation of their child are considered. Second-language learning is studied alongside first-language learning. The juxtaposition of so many views and facets of imitation in this book will help us to study the commonalities as well as differences of various forms and functions of imitative language and will help us to discern the further dimensions along which we must begin to differentiate imitation.