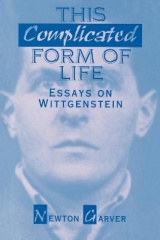 Your price
£17.32
Printed on Demand
Dispatched within 7-9 working days.

This Complicated Form of Life

Essays on Wittgenstein. Contemporary Issues in the Middle East

By (author) Newton Garver
Genres: Western philosophy, from c 1900 -
Format: Paperback / softback
Publisher: Open Court Publishing Co ,U.S., Chicago, IL, United States
Published: 1st Aug 1994
Dimensions: w 152mm h 229mm d 19mm
Weight: 501g
ISBN-10: 0812692535
ISBN-13: 9780812692532
Barcode No: 9780812692532
Synopsis
Wittgenstein has most often been treated as a thinker whose ideas can be discussed independently of any intellectual tradition. The thrust of these essays, by America's leading authority on Wittgenstein's thought, is to insist on the mutual relevance of Wittgenstein's work and the tradition of Western philosophy. Far from overthrowing that tradition, Wittgenstein builds on it, draws from it, and contributes to the fruition of certain elements in it. Particular attention is paid here to Kant, and to what Finch has called Wittgenstein's completion of Kant's revolt against the Cartesian hegemony of epistemology in philosophy. Also very Kantian is the dualism that seems unavoidable in a perspective or "Weltanschauung" which contains both facts and meanings, since meanings always somehow transcend the plain facts that convey them and that they convey. With respect to the givenness of language-games and of "this complicated form of life", on the other hand, Wittgenstein seems closer to Aristotle than to Kant. Seeing Wittgenstein within the tradition of Western philosophy requires a fresh look at Wittgenstein as well as at that tradition. Among the themes of this work: that the principal metaphysical claims of the "Tractatus" is that the world is the totality of facts; that grammar is the key to Wittgenstein's later work because philosophy itself is a form of grammar; and that a certain sort of transcendentality pervades Wittgenstein's work.